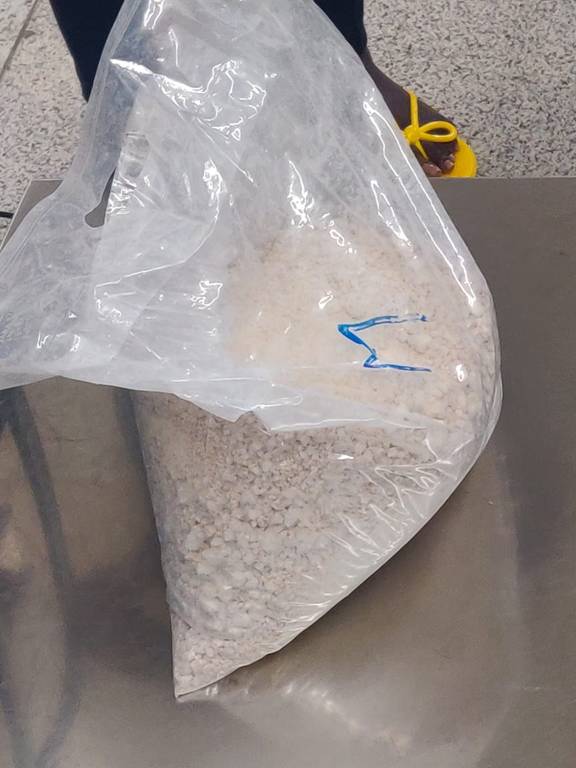 Two Zambian Passengers who arrived at T-3, Indira Gandhi International (IGI) Airport, New Delhi, from O.R Tambo International Airport, Johannesburg, via Doha by Qatar Airways Flight Nos. QR 1366 dated 14.04.2021 and QR 578 dated 14.04.2021 on 15.04.2021 were intercepted by the Customs Officers of this Airport after they crossed Green Channel and were approaching Exit Gate.

On the basis of profiling of sensitive routes and origins, they were asked whether they were carrying any contraband goods, to which they replied in negative. To verify their statements they were subjected to Door Frame Metal Detector (DFMD) examination in which nothing objectionable was noticed. Their baggages were scanned through the X-ray Baggage Inspection Machine in which some suspicious/objectionable images were noticed. On detailed examination of their baggages before two independent witnesses, 7 kg each, totally weighing 14 kg of white colour powder/granules, were recovered, which were concealed in specially cavities of their checked-in baggages. Representative samples of the recovered substance was subjected to Modified Drug Detection Kit which prima facie confirmed the recovered substances to be Heroin. The value of the recovered substances, suspected to be Heroin was estimated to be Rs. 98 crore.  During interrogation they accepted their guilt.

Both the passengers have been arrested. Further investigation in the matter is under progress.